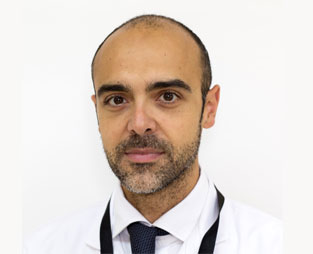 Since September 2015 Dr. Marco Mura is an Associate Professor of Ophthalmology at the Wilmer Eye Institute, Johns Hopkins University School of Medicine in Baltimore, USA and Chief of the Retina Division at the King Khaled Eye Specialist Hospital in Riyadh, Saudi Arabia.

He worked for more than 10 years as a vitreoretinal specialist at the Department of Ophthalmology of the University of Amsterdam in The Netherlands and he has been the director of the Retina Center of the Zonnestraal Eye Hospital in Amsterdam, The Netherlands. He is also been the director of the vitreoretinal fellowship program of the University of Amsterdam.

He received his medical degree from the University of Cagliari (Italy). His post-graduate training includes a residency in ophthalmology at the department of ophthalmology and visual sciences of the university of Cagliari and several fellowships in anterior segment and retina at The Hamilton Eye Institute, Memphis (USA), Moorfields Eye Hospital, London (UK), Academic Medical Center, Amsterdam (NL).

He performs an average of 1700 surgeries per year and he is actively involved in the development of new surgical instrumentation for vitreoretinal surgery in cooperation with major medical ophthalmic companies.

He is specialized in trauma, advanced diabetic retinopathy, PVR, re-operations, macular degeneration surgery and artificial vision (he performed the first retinal prosthesis implant in the Benelux).

Dr Mura was in 2011 and 2012 nominated as best doctor in the Netherlands by the medical journal Mednet.